Sport as a tool for positive social change

On Saturday, 23rd November 2019 GIZ Regional Programme Sport for Development (S4D) Jordan/Iraq officially handed over a series of training manuals to the Ministry of Education and the Jordanian sport federations which marks a milestone in the successful German-Jordanian collaboration to accelerate teachers’ and coaches’ qualification in Jordan. The manuals were developed jointly by German and local sport and social experts to the most up-to-date sport academical standards providing an important tool for coaches and teachers to transfer life and sportive skills to children and youth through sport. The German Ambassador to Jordan, H.E. Birgitta Siefker-Eberle and representatives from the Ministry of Education, the Jordan Olympic Committee, the Jordan Paralympic Committee and the Jordanian Handball, Football, Basketball and Flying Disc federations attended the formal handover of the ‘Sport for Development’ training manuals, of which we are proud of PS4L experts, Tamara Awartani and Sameh Masri, who were part of developing the basketball manual that was handed over to the Jordanian Basketball Federation. In addition to that guests from Germany such as the Olympic gold medallist Britta Heinemann, the German Football Association (DFB) Vice President Dr. Rainer Koch as well as representatives from the German Olympic Sports Confederation (DOSB) and the German Federal Ministry for Economic Cooperation and Development (BMZ) participated in the event which took place at the Jordan Paralympic Committee Sport Complex in Sports City, Amman.

On behalf of the BMZ, the GIZ Regional Programme S4D supports local organisations to introduce sport programmes in host communities and refugee/IDP camps in Jordan and Iraq. The aim is to increase access to sport activities for boys and girls and to foster the development of their personalities through sport. To achieve these goals in Jordan GIZ S4D has developed together with its political partner the Ministry of Education as well as civil society and sport organizations like the Association Development Football Programme (AFDP), the Jordan Olympic Committee and the local Handball, Football, Basketball and Flying Disc federations a comprehensive approach specifically designed to promote social competencies, teach values and allow a peaceful coexistence. German institutions like the DOSB and the DFB supported the development and implementation process with experts and knowledge directly in the field.

Since 2016, more than 700 teachers, coaches and social workers have been trained in the usage of the S4D approach and more than 80,000 children and youth from all parts of the population benefit from the fun, participatory and carefully facilitated sport activities in Jordan.

BMZ funds and promotes social cohesion between refugees, internally displaced persons and locals in the region. The initiative aims to tackle the root causes of displacement, stabilise host regions and support refugees. Sport programs can help to mitigate conflicts, support peaceful coexistence and therefore contribute to easing of the tense situation on local level. 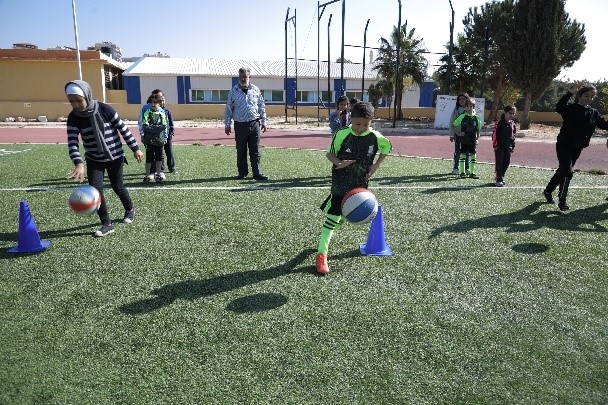